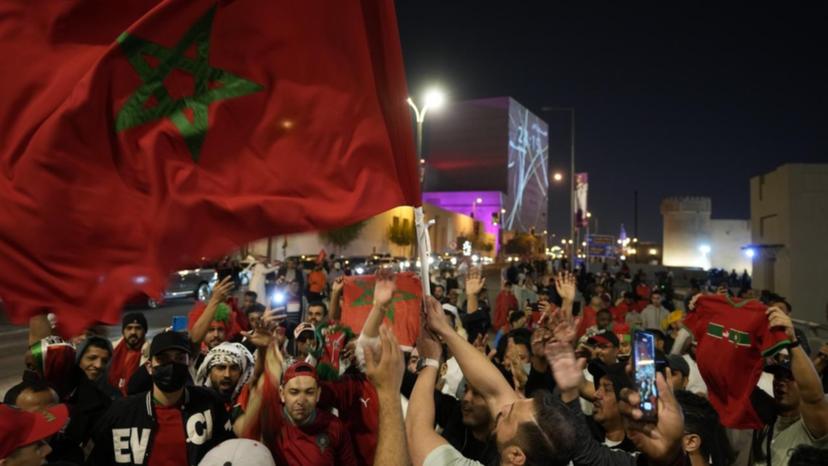 Ecstatic Moroccans have poured into the streets of their capital and in cities across the North African country on Saturday, waving flags, honking horns and lighting flares to celebrate the national soccer team’s historic victory over Portugal at the World Cup.

Morocco beat the Portuguese 1-0 in Qatar, knocking Cristiano Ronaldo out of the tournament and making the Atlas Lions the first African and first Arab team to reach the World Cup semi-finals.

The capital, Rabat, was bursting with joy while Morocco fans also celebrated in the streets of Doha and in cities across Europe, where many Moroccans live. Other fans from the Middle East and Africa who have adopted the Atlas Lions as their team were also jubilant.

“We were so stressed as if we were on the pitch with the players, but now we want the trophy,” said Mohamed Amine, who was celebrating in Rabat.

The victory has Morocco fans full of confidence for the days ahead. The team will face holders France in the semi-finals on Wednesday (Thursday 6am AEDT) after Les Bleus beat England 2-1.

In Qatar, hundreds of elated fans clad in green and red outside Al Thumama Stadium celebrated Morocco’s win, chanting, ululating, banging on drums and waving the national flag. Some chanted: “Congratulations to us for this beginning! It will only go on and on!”

“This is unbelievable. It’s the first time ever,” said Saleh al-Rayes, a 27-year-old fan from Saudi Arabia in Doha.

As an Arab at the first World Cup held in the Middle East, al-Rayes said he feels a sense of inclusion and representation in the world of soccer, a sport that has been dominated by European and South American teams.

“You come in as an underdog and then you win. It’s Arab pride,” he added.

“All Arab countries were here in the stadium supporting Morocco.”

Morocco’s victory has touched Palestinians since the players and many of their supporters expressed solidarity on and off the field during the World Cup. Palestinian flags were regularly featured in groups of Morocco’s supporters in Qatar and among fans celebrating in Europe.

“It’s an indescribable feeling. I swear, it’s as if it’s Palestinians that were playing,” said Ibrahim al-Lilli, a Morocco supporter in Gaza.

“It’s beautiful,” said 23-year-old Abdullaziz Errayes, who is from Libya and had his national flag tied around his neck like a superhero cape as he was leaving the stadium in Doha.

“It’s the first Arab, the first African country to reach the semi-finals. Morocco is representing us.”

“It’s a source of pride the Moroccan team’s achievement for the first time in the history of Arab and African football,” Ahmed Ben Messaoud said in Tunis.

“Continental history!” the Confederation of African Football wrote on Twitter after Morocco’s victory.

Musicians also congratulated Morocco and underlined the significance of the victory for the continent.

“Africa stand up … what an incredible ride — keep it up gentlemen,” Haitian- born rapper and singer Wyclef Jean tweeted. Shakira, a Colombian pop singer with Lebanese roots, celebrated with a one-line tweet: “This time for Africa!”

Moroccan fans around the world have celebrated their World Cup quarter-final win over Portugal. (AP PHOTO)