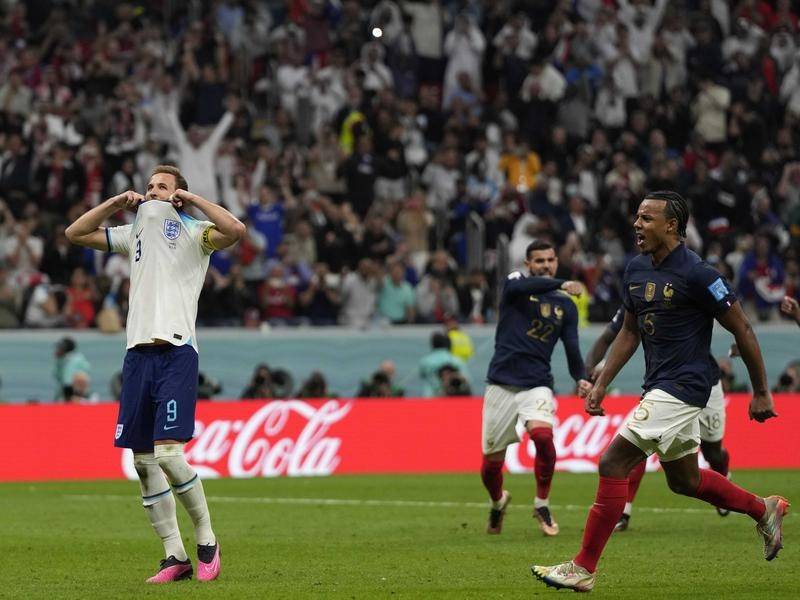 Having reached the semi-finals in 2018 and finished as runners-up at last year’s European Championship, Gareth Southgate’s men were dreaming of a mouthwatering semi against Morocco.

England’s hopes were dashed by Aurelien Tchouameni’s early thunderbolt, only for Kane to level from the spot and equal Wayne Rooney’s goalscoring record for the national team.

France’s all-time scorer Olivier Giroud restored the World Cup holders’ lead and it proved to be the winner on Saturday night after Kane blazed over a late penalty in a crushing 2-1 exit.

“I don’t think they could have given any more. They have played really well against a top team,” Southgate told ITV.

“I think we were here to win the tournament and we had belief we could.

“I think we showed in our performance against the reigning champions we have a team good enough to have done that.”

England have a long history of costly spot-kick misses but normally those issues arise in shootouts, like the agonising Euro 2020 final defeat to Italy last summer.

Southgate is contracted until next the European Championship and this may well prove his final World Cup match in charge – a night when his players rallied impressively after falling behind for the first time in Qatar.

“I think after every tournament we have sat and reviewed and reflected,” a non- committal Southgate said when asked about his plans going forward.

“It needs a bit of time to make sure everybody makes the right decisions.”

Both managers named unchanged sides in Al Khor and it was a cagey start to a match that came to life with Tchouameni’s thunderous drive from distance flew in on 17 minutes, after calls for a foul on Bukayo Saka in the build-up fell on deaf ears.

AC Milan striker Giroud put Didier Deschamps’ side back ahead, only for Theo Hernandez’s clumsy challenge on substitute Mason Mount to bring another penalty after Brazilian referee Wilton Sampaio reviewed the pitchside monitor.

But Kane found the Al Bayt Stadium stands rather than the net, meaning England are packing for home rather than preparing for a third successive semi-final in major competitions.

“I can’t fault my preparation or any details. It was just the execution on the night,” Kane said.

“The first (penalty) was great and the second one, I just didn’t quite hit it how I wanted to.

“That is something I am going to have to take on the chin. It will hurt for sure, and the whole game will hurt.

“We had full belief in what we were trying to achieve and, as the captain, I will take that, but I couldn’t be prouder of the boys.”

Kane would have broken Rooney’s record with the goal and injected renewed hope, but was instead left distraught after blasting his 84th-minute spot-kick over the bar.

It was a gut punch that England could not respond to, on a night that ended with substitute Marcus Rashford seeing a free kick 10 minutes into added time landing on the roof of the net.

“We know how many penalties Harry has scored for us, how many goals he has contributed to even get us here,” England midfielder Jordan Henderson said.

“You have to give credit to France who are a good team. I still feel it was there for us to win tonight.”

England skipper Harry Kane scored one penalty but missed another in the last-eight loss to France. (AP PHOTO)