Sandhu the hero as Thunder hold off Stars 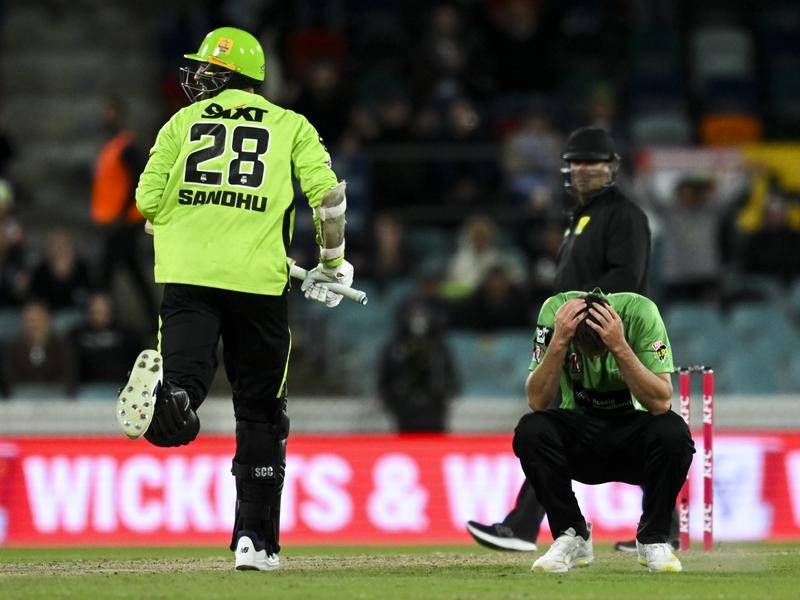 The Sydney Thunder have survived a disastrous batting collapse on BBL opening night to claim a one-wicket win over the Melbourne Stars, who have cause for concern after losing Joe Burns to a hamstring injury mid-game.

After the Thunder lost their last established batter Chris Green (17) on the first ball of the last over, Gurinder Sandhu (20no) was the unlikely hero, belting a six over deep midwicket before four byes off the final ball denied the Stars (8-122) a fairytale comeback.

Burns and Marcus Stoinis both tested positive to COVID-19 on game day but were permitted to play at Manuka Oval in accordance with relaxed biosecurity rules introduced this summer.

The pair’s premature exits on Tuesday night underscored a disappointing innings at the crease for the Stars, who were sent in to bat after losing the toss.

Burns pulled up sore running between wickets and after retiring hurt three overs later, was sent for scans on his hamstring.

Coming in once Burns left, Stoinis was caught at short fine leg trying to slog sweep Green on the first delivery he faced.

Stoinis was not well enough to field or bowl later on and instead watched the second innings from the boundary draped in a blanket.

The Thunder restricted the Stars thanks to economical spells from Daniel Sams (2-21), Green (1-19) and BBL debutant Fazalhaq Farooqi (2-20), who took two wickets in a powerplay that only yielded five runs for the Stars.

Nick Larkin (25) top-scored for Melbourne and from the 12th over onwards, the Stars hit only two boundaries.

Chasing down 123 should have been routine for the Thunder, who boast the likes of Alex Hales, Rilee Rossouw and Jason Sangha in their top order.

But in his long-awaited BBL debut, veteran New Zealand international Trent Boult snagged two wickets in three balls to knock the Sydneysiders off balance in the first over.

Matt Gilkes edged Boult to emergency fielder Brody Couch, who juggled the ball four times before taking a contender for catch of the year on the ground at short fine leg.

On Boult’s next delivery, Rossouw was caught by Nathan Coulter-Nile in the slips and the Thunder had lost two wickets without scoring a run.

Hales (16) and Daniel Sams (3) were thwarted in their attempts to slog the Thunder out of trouble, both victims of Coulter-Nile’s (3-19) efficient spell.

But Stars captain Adam Zampa sprung Ross with a length ball onto off stump that sealed his 100th BBL wicket and left the Thunder at 7-89.

Green and Sandhu needed 15 runs from the last two overs and when Sandhu slogged Luke Wood to long on for four, the Thunder had a sniff.

But a second classic catch from Couch, diving in the deep, had Green dismissed and the Stars were all but home with no more established batters left.

That was, until Sandhu rose from the rubble to keep the Stars at bay.

Gurinder Sandhu has helped the Thunder to a dramatic one-wicket final-ball BBL win over the Stars. (Lukas Coch/AAP PHOTOS)