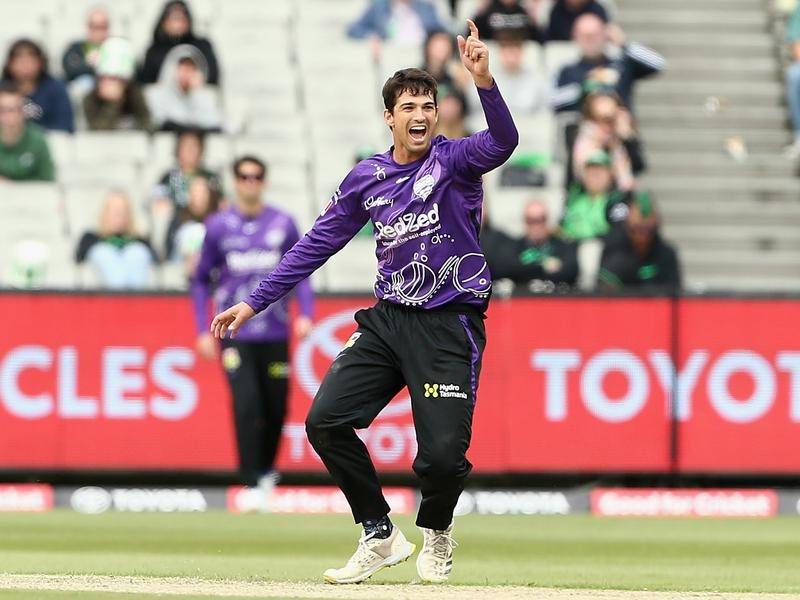 The 25-year-old weaved a spell of swirling-arm magic to inspire the Hurricanes to an against-the-odds eight-run victory over the Perth Scorchers in Launceston on Monday night.

Playing just his third BBL game, Dooley picked up 4-16 from four overs as his side defended 8-172.

The left-armer, who revealed his unique action was inspired by Indian quick Jasprit Bumrah, bowled a crucial 16th over that turned the game.

Dooley, whose figures were comfortably career-best, nominated the wicket of du Plessis as his favourite.

“Looking at the footage pre-game, we knew he was going to try and back away and try to hit me over cover,” he told FoxCricket.

“When I saw him do that I got a bit scared, but he missed it. That one went well.”

Dooley said he had always bowled by flicking the ball out but his action was a more recent development.

“Four years ago when India were out (touring Australia), I was just in the backyard on Christmas Day practising some Jasprit Bumrahs,” he said.

“It kind of worked with my rhythm so I just went with it and it goes alright now.

“If it distracts the batters when they first see me, it’s an added bonus.”

After Dooley’s sweet 16th, Hurricanes spinner Shadab Khan picked up Aaron Hardie in the penultimate over with a leaping caught-and-bowled.

Perth needed 14 runs off the final over, bowled by quick Nathan Ellis, but it proved a bridge too far.

The win breaks the Hurricanes’ five-game losing streak against Perth. Both sides are 1-1 to start the season.

Earlier, a half-century from Matthew Wade and some late swinging by Tim David headlined the Hurricanes’ innings.

Wade got his team off to a brisk start with 51 from 29 balls before Hobart wobbled in the middle overs, losing 5-18.

David weathered the storm and freed his arms at the death, hitting some much- needed boundaries in an unbeaten 46 from 28 deliveries.

Wade was in the middle on the second ball of the innings after Ben McDermott copped a Jason Behrendorff inswinger and was trapped lbw for a golden duck.

D’Arcy Short stepped up in his absence with 35 from 25 before becoming Tye’s second victim to a sharp low catch in the deep by Behrendorff.

Short had an ordinary night in the field, grassing two catches, including Inglis in the 30s.

Perth quick Jhye Richardson finished with 3-26 from four overs, including the scalps of imports Khan and James Neesham in the 13th over during the power surge.

Paddy Dooley (4-16) has bowled the Hobart Hurricanes to an eight-run win over the Perth Scorchers. (Rob Prezioso/AAP PHOTOS)