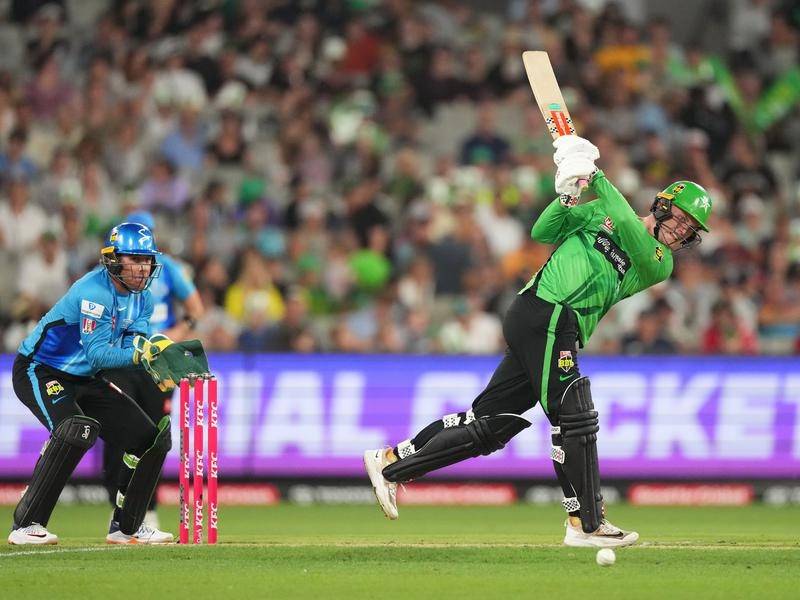 Tom Rogers has hit the first half-century of his BBL career to help the Melbourne Stars chase down a meagre total in a crucial nine-wicket win over Adelaide.

The Strikers’ high-powered batting line-up crumbled at the MCG on Thursday night as they were bowled out for just 108, following successive scores of 200-plus.

It was the lowest total of any side batting first this season and the third- lowest in Strikers franchise history.

In reply, the Stars cruised to 1-109 with 33 balls in hand without taking the power surge.

Rogers – a late inclusion as injured skipper Glenn Maxwell’s replacement this season – was the mainstay as he notched 51 not out from 45 balls.

“It’s something I’ve wanted to do since I was a young kid, so it’s an incredibly special feeling,” the 23-year-old said.

“We needed a win desperately … so if we can pile a few together now, you never know.”

The result lifted the Stars (3-7) off the bottom of the ladder and improved their net run rate, giving them a finals lifeline ahead of Saturday’s derby against the Renegades.

Adelaide (5-5) host the last-placed Brisbane Heat on the same day and are still firmly in the mix.

The Strikers’ low total came despite Matt Short hitting two of the first three deliveries of their innings for six as he took 20 off Luke Wood’s opening over.

They were the only two sixes of Adelaide’s innings.

Experienced duo Nathan Coulter-Nile (3-17) and Adam Zampa (2-20) shone for the Stars, who clamped down on their opponents and bowled almost 60 dot balls.

“The ridiculous thing about (Webster) is that’s not one of the better ones I’ve seen,” Rogers said.

“He’s that good and some of the slips catches I’ve seen from him are just ridiculous, so I fully expected him to catch that.”

Wood (1-33, 3.2 overs) was the only Stars bowler with an economy rate above five runs an over.

Harry Nielsen (40) top-scored for the Strikers, who are winless from six attempts against the Stars at the MCG.

“We were well short with the bat,” Nielsen said.

“We didn’t get off to the greatest start and found it hard work from then on.

“Those things happen in T20 cricket and you’ve got to move on pretty quickly.”